Our Future on a Hotter Planet 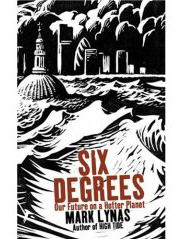 Mark has spent many weeks and months in the John Radcliffe Science Library in Oxford, reading thousands of recent journal articles and books about global warming. He has arranged his findings in six chapters, entitled 1 Degree, 2 Degrees, etc, followed by a conclusion.

The book describes itself as popular science. Everything is made clear to the non-specialist, but I did not feel talked down to. Although the contents are alarming, they are not alarmist. I found the book most informative.

Even with only one degree of warming, the prospects are grim reading. For example, America is likely to have a recurrence of its Dust Bowl problem of 1934 - 1940 (p8-9). Arctic ice melt gets worse; "between December 2004 and December 2005... an astonishing 14 percent of the Arctic Ocean's perennial sea vanished (720,000 square kilometres, the size of Texas, p33)."

Despite severe problems, "two degrees of global warming is likely to be survivable for the majority of humanity (p99)." But three degrees looks likely to trigger an acceleration in global warming due to Carbon cycle feedback (p126-128). Put simply, instead of absorbing Carbon Dioxide, the world's soils would start releasing it instead through heightened bacteria action. Millions of people suffering drought and famine in the tropics and subtropics are likely to migrate north into Europe and North America. With even greater warming, the Sahara desert will spread north of the Med, and everybody will be landing up in the UK! Five degrees of warming will lead to billions of lives being lost, but six degrees could wipe out humanity altogether (p230).

These quotations are just the tip of the iceberg. We need to take action, folks. This is not a time for our traditional approach of too little too late.